The Effect of Elastic Heterogeneities on Phonon Propagation: From Glasses to Nanocomposites 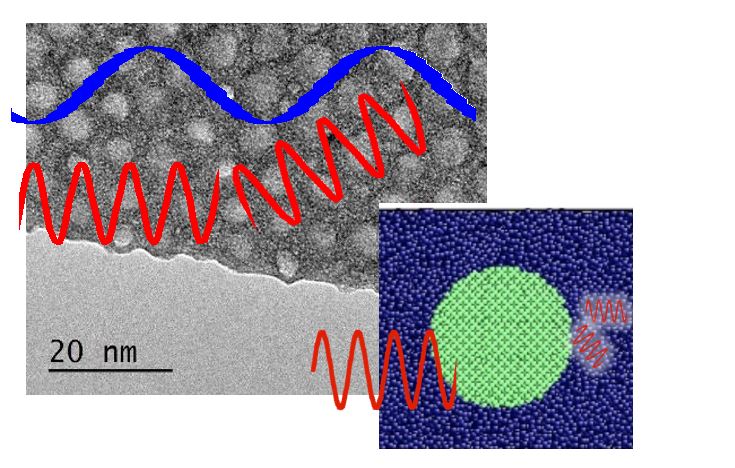 It is today largely recognized that collective vibrations such as phonons in crystals, can propagate as well in disordered materials, such as glasses or liquids at long wavelengths. Indeed, when the wavelength is very large with respect to the characteristic lengthscale of the disorder, the wave won’t even notice the existence of such disorder and the phonon will propagate in an effective medium with effective elastic constants. When however, the two lengthscales are similar, the wave will be scattered by the disorder, until scattering is so strong that the wave cannot propagate anymore. This is the Ioffe-Regel limit, separating the propagons (propagative phonons) from diffusons (diffusive vibrations) in glasses. Such limit is usually located at wavelengths of 1-5 nm, and energies in the THz range, which is the lengthscale of the elastic constants fluctuations in a glass, and it has been related to the appearance of the vibrational anomalies typical of glasses: a phonon attenuation growing with the fourth power of its energy (Rayleigh scattering) and an excess of states in the reduced phonon density of states, the famous Boson Peak [1,2]. There are however other materials in which elastic heterogeneities can naturally or artificially arise. This is the case of nanocomposites, materials made of the inter-twinning at the nanoscale of different materials with different elastic constants. Here the elastic constant fluctuations are at a lengthscale of tens of nanometers and have been predicted to strongly scatter phonons, leading to glass-like vibrational and thermal transport properties [3,4].  In this lecture I will go through these systems, showing their similarities and differences in phonon dynamics.

Valentina M. Giordano has performed her studies in Italy, at the University of L’Aquila, and carried on a PhD in collaboration between the LENS laboratory in Florence, Italy (LENS), and the IMPMC laboratory in Paris, France (2002-2006). After having developed a strong expertise in structural and vibrational studies on molecular materials at high pressure, she got a postdoc position at the European Synchrotron Radiation Facility, in Grenoble, France, on the inelastic x ray scattering beamline ID16, during which she has started to work on the high frequency vibrational dynamics of disordered materials, glasses and liquids. During her postdoc, and the following scientist contract on the beamline, she got several key results, among which the first experimental evidence of a crystal-like phonon dynamics in liquids at wavelengths comparable with the nearest neighbour distance, and of the so-called elastic anomalies in the vibrational properties of glasses, that can be related to the Boson Peak and to the low and weakly temperature dependent thermal conductivity in such materials. Since 2011 she is CNRS scientist at the Institute of Light and Matter in Lyon, France, where she has started and leads a research line on phonon dynamics and thermal transport in nanostructured materials, and more specifically nanocomposites.

By combining advanced large-scale facilities techniques together with laboratory techniques, she aims at investigating the microscopic origin of thermal transport properties in such materials, which are of interest for energy harvesting and thermal management applications. One recent key result is the demonstration that the Ioffe-Regel crossover in glasses, which marks the change from a propagative to a diffusive energy transport regime, can be anticipated through the introduction of nanocrystalline inclusions, pointing to a key role of the elastic contrast between matrix and inclusions.  She has published 56 articles in peer-reviewed journals and 2 book’s chapters (h-index 23).