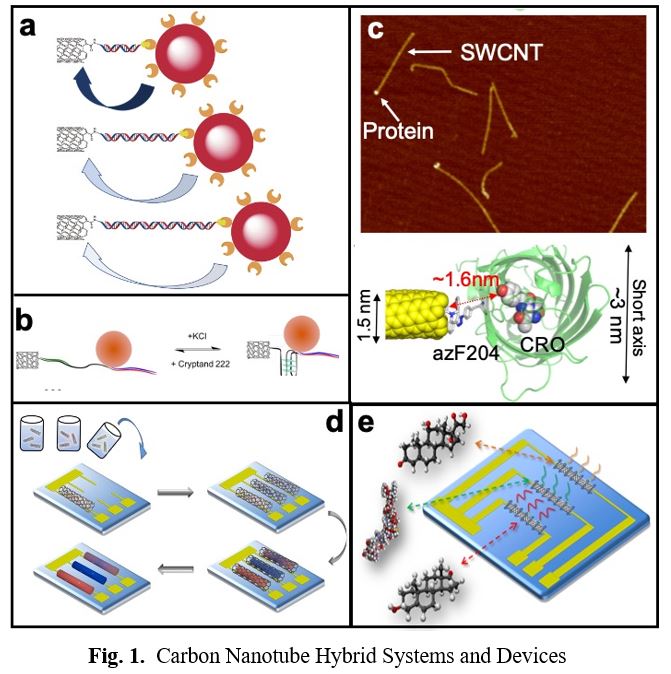 The controlled organization of individual nanostructures with nanoscale accuracy is key for the fabrication of the next generation opto- and bio-electronic devices. In this regard, we developed different platforms based on single walled carbon nanotubes (SWCNTs) as building blocks for nanoscale studies to be performed in a variety of research fields.

I will present a universal approach for the generation of multifunctional nanomaterials via the in-solution assembly of classes of molecular materials (organic, inorganic, and biological with promising attributes) to carbon nanotubes. I will first discuss the in-solution linking of metallic SWCNTs with different conjugated molecular wires. Conductive atomic force microscopy measurements performed at different locations along the junctions allowed us to measure the molecular conductance of a series of oligophenyls, highlighting the potential of an all-carbon based approach for solution-processable molecular electronics [1]. Moreover, we produced organic-inorganic heterostructures consisting of single Quantum Dots (QDs) univocally linked at the terminal ends of individual SWCNTs: we assembled static and dynamic organic-inorganic heterostructures (Figure 1a,b) [2]. A similar approach allowed us to also assemble stimuli-responsive DNA-CNT junctions, and  I will further demonstrate the selective electrical addressability of proteins via the use of carbon nanoelectrodes.  We investigated different one-to-one CNT-protein configurations and obtained single-molecule evidence of site-specific coupling between SWCNTs and specific proteins of interest (Figure 1c) [3].

I will then present the direct synthesis of multiplexed metal nanowire based devices using carbon nanotubes as vector templates. SWCNTs were filled with specifically designed metal precursors and dispersed in aqueous solution, enabling solution processability. Metal nanowires were then grown by a facile and low temperature annealing treatment, while the nanotubes were removed using an oxygen plasma once immobilized (Figure 1 d) [4]. By employing the sidewall of DNA-wrapped CNTs, we also induced the growth of PbS or CdS nanoparticles directly on the sidewall of the nanotubes, and fabricated multiplexed photodetectors from these nanohybrids.

Finally, I will discuss a strategy for the fabrication of reconfigurable and solution processable nanoscale biosensing devices with multi-sensing capability. SWCNTs were functionalized with specific, and different, aptamer sequences, and immobilized from solution onto different pre-patterned electrodes on the same chip. Multiplexed detection of biomarkers indicative of stress and neuro-trauma conditions was successfully performed, down to physiologically relevant concentrations (Figure 1e) [5]. Additionally, we extended this strategy to protein-protein recognition in the context of investigating antimicrobial resistance. We constructed nanoscale protein-based sensing devices designed to present proteins in defined orientations; this allowed us to control the local electrostatic surface presented within the Debye length, and thus modulate the conductance gating effect upon binding incoming protein targets.

By and large, the strategies and approaches presented highlight how carbon nanotubes can be employed as nanoelectrodes, templates and transducers for the fabrication of solution-processable hybrid systems and devices for optoelectronic and bioelectronic applications.

Matteo Palma is a Reader in Nanoscience (Associate Professor) in the Department of Chemistry, at Queen Mary University of London (U.K). He carried out his doctoral studies at the University Louis Pasteur in Strasbourg (France), investigating the nanoscale structural and electronic properties of supramolecular assemblies for organic electronics via scanning probe techniques: his doctoral work has been awarded the “Young scientist award” by the European Materials Research Society in 2006. He then worked as a postdoctoral scientist at Columbia University (New York, U.S.A.) focusing on the use of surface chemistry and nanofabrication strategies to control (bio)molecular self-assembly at the nanometre scale. Since 2013 he is a Principal Investigator at Queen Mary University of London where he leads a research group focusing on the controlled assembly of functional nanostructures, down to single-molecule resolution.  The research group uses (supra)molecular interactions to drive the self- organization of nano-moieties from solution to nanopatterned substrates, employing different building blocks for this: carbon nanotubes (as nano-electrodes/transducers), DNA origami (as nanoscale scaffolds), and 2D nanomaterials. Applications range from studies in the field of (supra)molecular optoelectronics, to biosensing and single-molecule biological investigations.