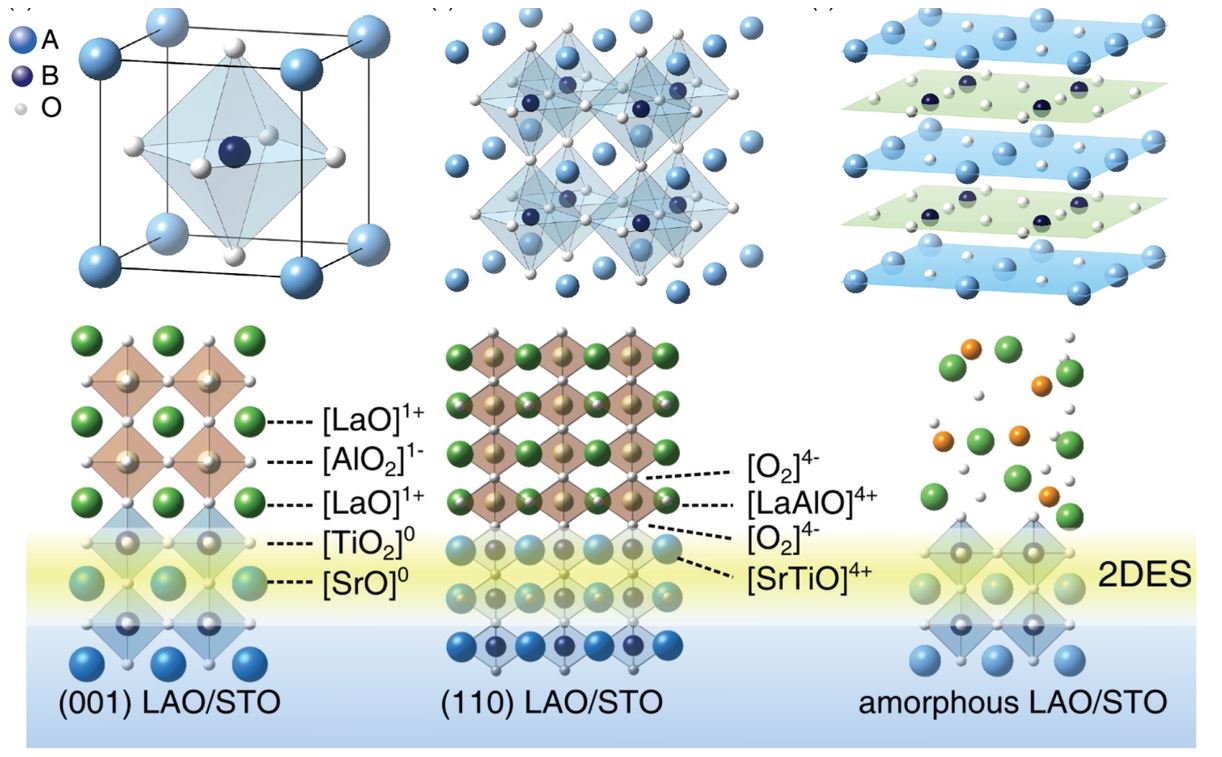 In quantum wells (quasi-) particles are confined in the dimension perpendicular to the surface, whereas the movement in other dimensions is not restricted. In such a situation, the quantum well thickness becomes comparable to the de Broglie wavelength, leading to energy subbands where only discrete energy values are allowed. Quantum wells are often realized with a semiconductor thin layer embedded between other semiconductor layers of wider band gap (e.g., GaAs embedded in AlGaAs). A wide variety of electronic quantum well devices have been developed over the years, with applications such as lasers or photodetectors and are, thus, of relevance to the electronic and telecommunication industries.

Here the focus is on a different type of quantum wells, where electrons, in contrast to other conventional semiconductors, come from d-orbital states, where electronic correlations play an important role. The two-dimensional (2D) electron system at the LaAlO3/SrTiO3 interface is the archetypal example of this class of materials, which has triggered the research of oxide quantum wells based on other transition metal oxide interfaces [1]. LaAlO3/SrTiO3 quantum wells are distinguished by a strong electronic confinement –down to a few nanometres – and large susceptibility to electrostatic gating, which makes this type of systems an ideal platform for low-dimensional quantum transport. Over the last years, we have investigated the gate tunability of Rashba spin-orbit fields [2], with important implications in the field of spintronics. Likewise, we have demonstrated multicondensate 2D-superconductivity tuneable by electrostatic gating [3]. I will briefly review this research and its relevance for fields like spintronics or quantum computation.

My review also includes the discovery of unusual phototransport in LaAlO3/SrTiO3 quantum wells, whereby we observed plastic changes of conductance induced by light that replicate the time causality of electrochemical signals in biological neurons [4]. More specifically, by using optical excitation of different wavelengths, we increase or deplete the number of long-lived photoexcited carriers in the quantum well dynamically. The observed photoresponse is the result of the combination of two photoexcitation processes, involving the photoexcitation of carriers trapped in defects either towards the quantum well or to surface states via quantum tunnelling. The critical role played by time in this unconventional phototransport response paves the way to an optical implementation of spike-timing dependent plasticity [5], emulating the principles found in neurobiological systems. Additionally, the observed photoresponse may also open the way to an optical control of spin-charge conversion efficiency, and generation of spin currents in spintronic devices.

Gervasi Herranz, a Condensed Matter Physicist working in Materials Science, Quantum Transport and Nanophotonics at the Institute for Materials Science of Barcelona (ICMAB), which belongs to CSIC (Consejo Superior de Investigaciones Científicas, the Spanish National Research Council). He got his current position in 2008, and recently he is promoted to CSIC-Scientific Researcher. Before his incorporation to CSIC, he spent four years (2004-2008) at the Unité Mixte Physique-CNRS Thalès, where he worked in Spintronics.

The potential of transition metal oxides, a class of strongly correlated systems, motivates his research to find pathways to fundamental discoveries and applications in electronics and photonics. These materials are distinguished by their rich variety of physical properties, which come from a delicate balance of different energy scales. This makes them particularly susceptible to external perturbations, inducing transitions among different electronic phases (magnetic, ferroelectric or superconductive). Along these lines, his scientific activity has led to fundamental discoveries related to quantum transport in oxide quantum wells and light-matter interactions, especially in photonic and plasmonic crystals. His scientific record is available at Researcher ID: http://www.researcherid.com/rid/G-2770-2014 and ORCID: http://orcid.org/0000-0003-4633-4367, and Google Scholar. News about his research can be found at the website https://gervasi-herranz.blog/.