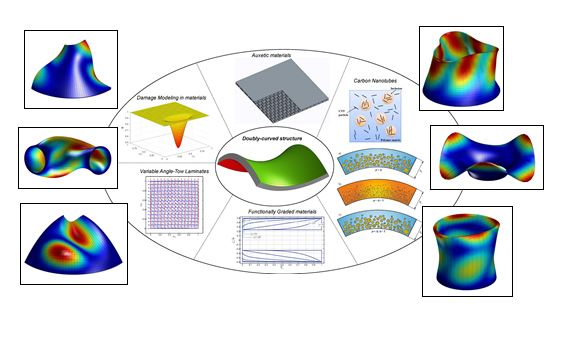 In a context where the mechanical modelling of composite materials at different scales requires an increased accuracy in many engineering problems and applications, e.g., aerospace components, aircrafts, boat hulls and sails, car bodies, long span roofs, as well as electronic devices, and drones, this work offers an overview of different theoretical and numerical models developed by the author to treat heterogeneous materials and complex structures. Composite materials are well known to improve the mechanical properties as strength and stiffness, together with increased thermal properties and reduced weight. These properties can affect the mechanical behaviour of beams, plates and shells, in terms of static, dynamic, and buckling response, as well as their nonlinear fracturing phenomena occurring at different scales. Enhanced structures and composite materials feature internal length scales and a nonlocal behaviour, whose response could be analysed through parametric investigations, including the effect of the staking sequences, ply orientations, agglomeration of nanoparticles, volume fractions of the constituents and porosity level. In such a context, a numerical campaign has been performed by the author [1-4] to deal with fiber-reinforced composites and laminates, Functionally Graded Materials (FGMs), Carbon Nanotubes (CNTs), Graphene Nanoplatelets, auxetic materials, latticed and cellular (honeycomb) materials, SMART constituents, as well as innovative and advanced classes of composites such as Variable Angle-Tow (VAT) laminates. Some examples could be represented by large stroke SMART actuators, piezoelectric sensors, shape memory alloys, magnetostrictive and electrostrictive materials, as well as auxetic components. These constituents could be included in the lamination schemes of SMART structures, for a successful control and monitoring of their vibrational behaviour and/or static deflection. Among many possible structural applications, doubly-curved shells represent the most intriguing elements, due to their unique shapes and outstanding mechanical behaviour. Nevertheless, the difficulties that can be encountered during their structural analysis are related to these aspects as well. The study of structures characterized by variable radii of curvature is still an open topic, as proven by the huge number of papers published in the last decades. To this end, many scientists and engineers developed even more refined approaches able to investigate their mechanical response in an accurate manner. Thus, a theoretical framework based on Higher-order Shear Deformation Theories (HSDTs) has been developed by the author [1,4], to handle several kinds of external forces, such as seismic actions, point and line loads, the effect of an elastic foundation and arbitrary angular velocities of structures. A theoretical closed-form solution for such complicated structural problems is usually cumbersome, such that advanced computational or numerical methods are strictly required to obtain accurate results. The Generalized Differential Quadrature (GDQ) and Generalized Integral Quadrature (GIQ) methods [1] are proposed to solve different kinds of structural problems, including the computation of natural frequencies, the transient dynamic response caused by a time-dependent loading condition, the critical rotating velocities, the through-the-thickness variation of the stress-strain profiles. The above-mentioned methods are here implemented as efficient and accurate numerical tools in DiQuMASPAB software [5] to solve the fundamental system of equations both in a strong or weak form.

This research was supported by the Italian Ministry for University and Scientific, Technological Research MIUR and by “Fondo per il Finanziamento delle Attività Base di Ricerca” (FFABR2017) - ANVUR n. 20/2017, 15 June 2017. The research theme is one of the subjects of the Centre of Study and Research for the Identification of Materials and Structures (CIMEST) - ’’M. Capurso’’.

Francesco Tornabene received his Doctoral Degree (2007) in Structural Mechanics at the University of Bologna, discussing the Thesis “Modeling and Solution of Shell Structures Made of Anisotropic Materials”. He received a research fellowship at the University of Bologna (2007-2009), working on the “Unified Formulation of Shell Structures Made of Anisotropic Materials. Numerical Analysis Using the Generalized Differential Quadrature Method and the Finite Element Method”. He became a Junior researcher (2011-2012) within the research program entitled “Advanced Numerical Schemes for Anisotropic Materials”; an Assistant Professor and Lecturer at the University of Bologna (2012-2018); an Assistant Professor in Structural Mechanics and Lecturer at the University of Salento (2018-today). He is author of more than 260 scientific publications and 11 books, and he collaborates with many national or international researchers and professors all over the world, as visible from his scientific production. He is member of the Editorial Board for 42 International Journals; he is also Editor-in-Chief for 2 International Journals: Curved and Layered Structures and Journal of Composites Science, and Associate Editor for the International Journal Mechanics Based Design of Structures and Machines. In the last years he received different Honors and Awards: “Highly Cited Researcher by Clarivate Analytics” (years 2018, 2019), “Ambassador of Bologna Award for the organization of 21st International Conference on Composite Structures ICCS21, 4-7 September 2018, Bologna, Italy” (2019), “Member of the European Academy of Sciences” (2018-today), among others. He collaborates as reviewer with more than 240 prestigious international journals in the structural mechanics field and material science. From 2012, his teaching activity includes Dynamics of Structures; Computational Mechanics; Plates and Shells; Theory of Structures; Mechanics of Solid and Structures. He is habilitated as Associate Professor and Full Professor in Mechanics of Solid and Structures and as Associate Professor in Aeronautical and Aerospace Engineering and Naval Architecture.