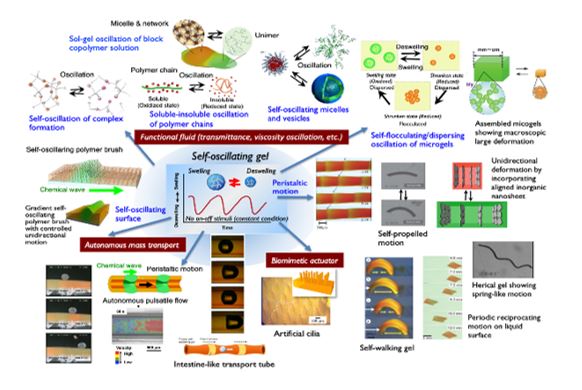 In the field of polymer science, polymer gels have made rapid progress and many kinds of stimuli-responsive polymer gels that exhibit reversible swelling-deswelling change in response to environmental changes (e.g., solvent composition, temperature, pH change, light, electric field, etc.) have been developed.  Especially, from the late 1980’s, new functional gels called “intelligent” or “smart” gels have been created, and their applications to bio- or biomimetic materials such as actuator (artificial muscle), drug delivery systems (DDS), tissue engineering, purification or separation systems, biosensor, shape memory materials, molecular recognition systems, etc. has been exploited.  In these researches, a concept of “chemo-mechanical gels” to convert chemical energy of chemical/ biochemical reaction to mechanical energy of gels has been proposed as a model of artificial muscles to realize soft actuators. Furthermore, with the progress of polymer synthesis technology and supramolecular science, gels with unique network structures have been designed to provide rapid response, toughness, and self-healing properties, etc. In these ways, many kinds of stimuli-responsive polymers and gels and their applications inspired by living systems have been studied.  Other than stimuli-responsive function, one of characteristic and important behaviors in living systems is autonomous oscillation, that is, spontaneous changes with temporal periodicity (called “temporal structure”) such as heartbeat, brain waves, pulsatile secretion of hormone, cell cycle, and biorhythm.  However, there are few studies on polymer and gel systems undergoing self-oscillation under constant condition without any on-off switching of external stimuli.  If such autonomous systems can be realized by using completely synthetic polymers, unprecedented biomimetic materials may be created. From this viewpoint, “self-oscillating” polymer gels that undergo spontaneous cyclic swelling–deswelling changes without any on–off switching of external stimuli, as with heart muscle, were developed by the author’s group. The self-oscillating gels were designed by utilizing the Belousov-Zhabotinsky (BZ) reaction, as an oscillating reaction. We have systematically studied these self-oscillating polymer gels since they were first reported in 1996 [1].  Potential applications of the self-oscillating polymers and gels include several kinds of functional material systems such as biomimetic actuators [2], mass transport systems and functional fluids.  For example, it was demonstrated that an object was autonomously transported in the tubular self-oscillating gel by the peristaltic pumping motion similar to an intestine.  Further, self-oscillating polymer brush surface like cilia, vesicles or colloidosomes undergoing cell-like autonomous shape oscillations with buckling [3,4], was prepared.  Besides, autonomous sol-gel oscillation and amoeba-like motion was realized utilizing well-designed block copolymer solution [5]. In this lecture, recent progress on the self-oscillating polymer gels is summarized.

This work was supported in part by Grants-in-Aid for Scientific Research from the Ministry of Education, Culture, Sports, Science and Technology of Japan.

Ryo Yoshida received a PhD degree in chemical engineering in 1993 from Waseda University, Japan.  He was a research associate at Tokyo Women’s Medical University in 1993, a researcher at National Institute of Materials and Chemical Research in 1994-1997, and an assistant professor at University of Tsukuba in 1997-2000.  In 2001, he moved to the University of Tokyo as an associate professor and became a full professor in 2012.  His research interests are functional polymer gels, smart materials, biomimetics, soft actuators, nonlinear chemical systems, autonomous material systems, etc.  He has been actively researching self-oscillating polymer gels as novel biomimetic and smart softmaterials with spatio-temoral structure.  He has published over 200 peer-reviewed articles.  He got the SPSJ (the Society of Polymer Science, Japan) Wiley Award in 2009, New Age Technology Award, International Association of Advanced Materials in 2018, The Award of the SPSJ 2019, etc.  In 2019, he was featured in the “Author Profile” section of the journal “Angew. Chem. Int. Ed.” as an author who has published 10 papers in the last 10 years (https://doi.org/10.1002/anie.201901583).